October 18, 2017 – The Children’s Medical Group kicked off its 16th Annual Campaign to benefit “United Way of the Dutchess-Orange Region” with close to 100 attendees. CMG employees heard presentations on how their donations help make a difference in the local community from Rachel Johnson, Vice President of Development at United Way of the Dutchess-Orange Region, Sharon Williams, Executive Director of Big Brothers Big Sisters of Orange and Marlene Taylor, Instructor of Your Defiant Child with Mental Health America of Dutchess County.

Joe Heavey, CEO of The Children’s Medical Group, has been involved with United Way for over 20 years and served as an inspiration to CMG employees. As part of the fundraiser, Annette Ferrari of CMG was able to secure some fun prizes like high-end handbags.

Presenters at this year’s event shared stories of how gifts from CMG have helped children heal from domestic violence, fund developmental screenings (CMG was one of the first United Way check-up sites) and provide mentoring and tutoring for at-risk students. One of the most moving stories of the night came from Big Brothers Big Sisters, who told the story of Ana, who was provided with a special mentor thanks to United Way supporters like CMG. Ana’s rough childhood and the loss of many family members lead her to Big Brothers Big Sisters, which is funded by United Way. After months of persistence by her mentor, Ana gradually began opening up and is now looking at colleges with her mentor. CMG gifts are used to fund this program and help at-risk children succeed in school and life.

The campaign raised close to $11,000 this year. United Way’s Children’s Corner is one of the programs CMG helped to support (pictured below): 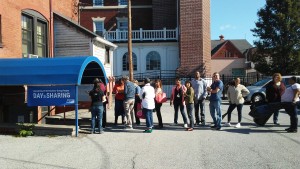 People lining up for United Way’s “Days of Sharing” where they gave out Gift in Kind items. 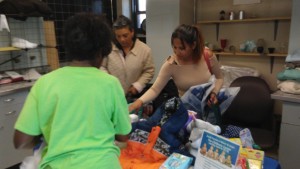 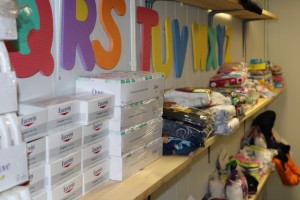 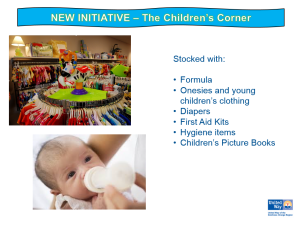